To medicate or not to medicate

Somehow I knew the question would be posed to me at one point. At a recent paedatrician appointment our second one, but first with a new paedatrician. In the past I have watched different videos in where the children suffering from Selective Mutism because of their severity were given medication to jump start their progress so I was familiar with types of medication and how it works. The point of where I was at when I went to the paed was one of some desperation I was concerned for my son's schooling. I knew there was something going on with his language skills with his comprehension, he wasn't coping well with instructions and I wasn't sure what was really going on. We hadn't had a real chance to chat with the school to find out more information around how and what was happening. We had also had an Occupational Therapist  Assessment and didn't have the report to go with it. I think I felt quite frazzled, with not much information to give to the paedatrician about where he is at.

So in setting the scene, I was proposed the next step in his treatment given the fact that he has already been in therapy for two years approximately and that he still was struggling with speaking and had not made substantial progress which can be normal for Selective Mutism. The paedatrician had approached it in the right way built up to it then finally used the words. I knew what he was going to say. He discussed the possible side effects the scariest was suicidal ideation apparently this is rare unless the person taking the medication had depression. The dose that was recommended was 20mg to start on 1/2 per day in the morning it was possible that he would feel sick and increase to 1 tablet and change it over to night time. Apparently even though this medication is actually used for depression traditionally for children it is often used for anxiety also and in these situations it is common that a high dose is needed for it to be effective.

My worries was that he would be discouraged to the point that he wouldn't try at school and find the struggle to communicate too much of a burden and consequently withdraw, or stop trying or misbehave. Hearing him describe himself as slow to do school work, that he forgets, that he can't draw it, couldn't finish a task because he couldn't spell it really concerned me. Initially I considered putting my son on the medication as I was concerned about all these factors.

With all this going through my head I went home heavy in thought, I decided to keep it on the quiet as we wanted to make this decision on our own without other opinions, without people worrying about the implications, I knew we had to make it without worrying about what others thought. One morning I had decided that we were going to go through with the medication part of me was wanting to remove the anxiety from my son's life make it just go away. I was tired of worrying about him talking and not talking, worrying about how he would feel all the time, the work behind it all and fighting for help. It was so tempting to take an "easy way out" not really but you get the idea. Mentally I felt exhausted. This was all about how I felt.

While talking to a friend I realized that I constantly thought about how I felt, what I had to do, how I had to fight the extra burden of caring. In this process of thinking about me I had actually forgotten who this was all about, my son. My son who deals with anxiety as a part of his life every day, will I ever understand how he really feels, is it as bad as I think it is I may never know. Whatever the case is I must always act on his behalf to the best of my knowledge, not for my best.

So to be thorough I looked up the CCMI sheet on the medication that was given to us Lovan was the name and it mentioned that for children the possible side effects were weight loss and possible reduced height gain. This caught my attention and I couldn't quite dismiss it. It bothered me my son who already was a little skinny does not have any fat on him despite eating like a horse could not afford to lose weight and I didn't want him to be short because of medication we gave him. I had a dramatic imagination that was not pleasant and short genes already being in my family the prospect was not good. 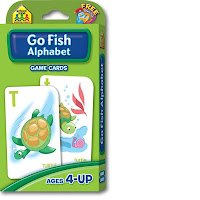 The very next day something happened that gave me some hope at the psychologist's office previously he had been only speaking a few words at most, we introduced a new game fish. This worked remarkably well the concept being that anxiety is brought on by many things. For some kids like my son the struggle to communicate also is impacted by the situation. If you introduce a situation that is predictable a game that has turn taking or structure it can actually reduce the anxiety of the social interaction and then freeing up space increasing the chances of any speech. For the first time that we can remember Josiah was able to use his words, he spoke quite a lot. Our psychologist was so happy she hadn't actually heard him speak so much ever. I did discuss the possibility of medication and she suggested it was a good idea to wait until he regressed or plateaued in his progress, some food for thought.

This started me thinking of the slow progress Josiah did show, what he was already achieving already. If one is honest he/she must admit dealing with Selective Mutism as a parent is frustrating it takes some time to achieve anything and even then they can regress without warning or any reasons why. This is what lead to our decision, did I want to start medication out of frustration. Secondly for medication to work there must be a strong support base, which in some aspects we didn't have. We were and still are waiting on the results of the funding application the school had made. If were to take a risk and try the medication we want to have everything set in place at this point that isn't the case. I also considered that the impact for Josiah to overcome his fears and the strength of self he would have if he was able to do this on his own. Now don't get me wrong I wouldn't allow him to suffer in his anxiety or flounder, this only works as long as their is small baby steps of progress. So for now the answer is no.. but not a never. If the situation changes we will reevaluate and take all of these factors into consideration again. Keeping an open mind.
Posted by Kerry at 11:14 PM 1 comment: 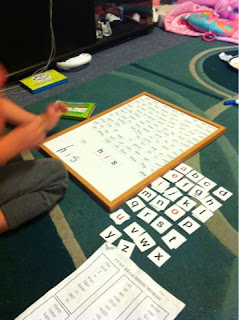 If anyone asked me if I ever wanted to become a teacher, I would have answered with a resounding NO.. not ever. The things children inspire you to do. With my son's history of hearing issues and speech delay I am ever conscious of his literacy knowing that phonics can be an issue for those who struggled with glue ear especially. This is an activity that I did with Josiah to help him with his sight words. What you will need to do this activity is a whiteboard (and markers) and magnetic letters and words I bought mine from Scholastic Book Club. You change this to suit what tools you have at home.

Amazingly I have this strange child who actually likes to do this type of stuff, he has a passion for learning, reading, writing this I am grateful for everyday. 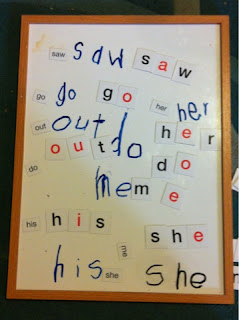 This is the final product.. he was a little exhausted mentally after all of this, he was happy with just one game of this.
Posted by Kerry at 9:34 PM No comments: