Tools of the trade: breaking the silence at school

What I have been working on lately which has been the hardest to get started but ended up not taking too much time. We agreed at school Josiah needed a small book to assist with communication so that he is able to attempt communication when needed.
Deciding on the signs
First of all which took the most time I looked and looked to see if I could find the pictures I needed to make the book just in Word or another similar program. This proved most difficult because in using other people's designs it meant they chose the pictures and the content of communication. So I took the plunge and downloaded the software Boardmaker vs. 6.
After some initial confusion, it didn't take long to figure things out. Unfortunately it lacks some of the tools that Word and other programs use and I think it would take someone with less than average computer skills sometime to work things out and this is a disadvantage. However what is helpful is the pictures you type in what you are looking for and it brings up a set of relevant pictures. Once I figured it out I got things sorted and I was able to print up everything I needed.
The publishing process
What I used to bring it all together I printed the pictures onto a a5 size sheet and then cut them up so they fitted onto a a6 page this is a 1/4 of a a4 which I thought was the right size not too big and not too small. I aimed to make it as simple as possible so it would be easier to use for Josiah. I used coloured paper a different colour for every page and then laminated them. To bring it all together I went to the stationery shop and they had some small rings that you can insert into the book just using a simple punch to make the holes.

Implementation
The next step is to help Josiah to be able to use it at school. No point having a wonderful program without it being used. The concept is simple. When Josiah was non verbal over Christmas he was able to use his sign language at other situations with family and friends. He has been able to use his sign language to some extent at school. The dilemna with any type of augmentative communication is the belief that it will become a crutch for the child if allowed to remain in this stage. But I suppose this only happens when nobody monitors the situation, if there is close monitoring then I believe that it will enhance his communication and lead to verbal communication in the future. Please read this article: Augmentative Communication.
Posted by Kerry at 1:51 PM 4 comments:

Tools of the trade: dealing with the anxiety before School

So at present their are two main issues at hand. First of all Josiah does struggle to get to school, unfortunately despite having plenty of time to get to school on time Josiah really struggles to get there. Sometimes it is the normal stalling and other days he crawls up into a ball and hides. Other days we have to help him get dressed because he is refusing to do so on his own. It is easy to get frustrated and just focus on the fact that he is not listening to what he is being told or we can get strategic and make it fun for him to get ready, empower him and give him incentives to do what he needs to do. Two things we are using for now are the following:
The first of all I modified something from something I bought (which was downloadable) from a site called PECS for Autism obviously Josiah doesn't have autism however most sites who have anything to do with PECS (Picture Exchange Communication System) are related to Autism. The idea is that they have a schedule for the morning and they move the items over to complete once they are done. The actual product was not quite what I was after so I did a bit of modifying and put it onto two pages so it is clearly read and understood by Josiah. This is the finished product. 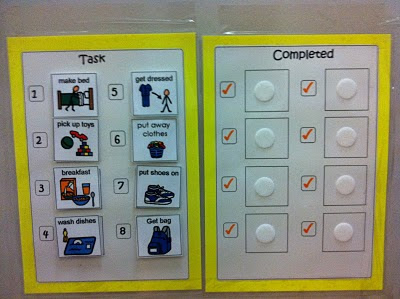 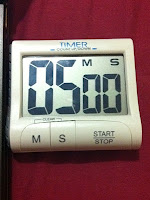 The second tool not so flash is a cheapy timer I got from Woolworths but really cool as it has large digits that are super easy to read for a young child. The way we use this is to give each small broken down task say a five minute time on it, to see if he can beat it. Some we give an extra minute. When he is in a good mood he really responds to this, however we are keeping everything low key (including the schedule) so the novelty doesn't wear off too fast. I love it when he says "the timer beat me again" in frustration!
Last but not least once we have wrestled him (sometimes this is literally) into his school uniform, in the moments before we go to school I take him give him a big hug, tell him that he is going to have a great day at school, he is going to have fun etc... This I have learnt is one way to help change their thought processes to encourage him to believe that he can have a good day at school and he doesn't have to fear. Then I get a book Power of a Praying Parent and pray through fear and instilling a desire to learn prayers. All four of these strategies I believe work together and achieve slowly and painstakingly help him get through the tough days.
Posted by Kerry at 8:40 PM No comments:

Learning to trust my insticts

This is how the story goes when we had the second appointment with Josiah there, we had some issues with Josiah playing with me and not with her, he turned his back to her and she was not able to engage him I was waiting for her to take the lead and this did not occur. What happened next was the most concerning, she asked to speak to me privately. Then I was questioned as to "why I had taken over the session? was I trying to overcompensate for my son" through the conversation she then stated that I had anxiety issues and a problem with anxiety, I explained that any anxiety was because I was dealing with a stressful situation and it was hard being a parent to a child with SM. Then I was informed my fears about other opinions are my own internal fears and not real. She also told me that she was not willing to work in the school and felt this was unnecessary and she would decide if it was necessary.
So we made a time to see her, my husband informed her Josiah would not be coming. When we arrived she asked where Josiah was, good listening skills right there. After some discussion I asked the worker about the issue of her not being willing to attend the school if needed. Her response showed us how inflexible she would be to work with. I said to the worker that from my research a lot of the work done usually happens in the school. The response was that I am not arguing with you. She could not see any benefit from working in the school and would only work from her therapy room. She then said that calling what Josiah has as Selective Mutism narrows the focus.
My decision was being made during the session that my anxiety only arrived with her criticism of me, and how I relate to my son. Every moment I was with her I felt like I was fighting her and I said I felt a clash between us, she had no idea of this. Thinking of working with the psychologist that we need to pay for, brought me back the peace that I had lost ever since I had worked with her. Since then I have heard that she has questioned if my son has an intellectual disability, this confirms my choice. From seeing my son for less than half an hour how can she make that assumption based on good professional evidence, this is most definitely a questionable judgement. If she had read the paediatrician report that we had given her, she would have that he ruled out an intellectual disability.
What have I learnt from this, should I compromise and accept second best for my son who is still in crisis and only just beginning to talk again, the answer would be no. What is best for my son is what I should be striving for, not second best, not what goes against my better judgement and not someone who does not empower me but dis-empower me and make me feel like I am a bad parent.
Posted by Kerry at 1:58 PM 1 comment: